Tiny Belgian Time Capsules: you can spend the night in this vintage music box

Need a little tumble down the rabbit’s hole? Sarabande is a powerful time capsule, posing as a pastel pink bonbon, that will send you back in time to the sounds of a gentle cello.

Here’s an instant cure for modern stress: push the overgrown wooden door of “172, Lac de Genval”, inhale the smell of fresh roses and grapevines and greet the resident ducks. Welcome to a slightly magical universe where time stands still and all you have to do is relax, read a book, maybe write one, paint, sketch, squeeze toothpaste over a canvas, rip gummy bears to pieces or whatever else creative kids do these days. 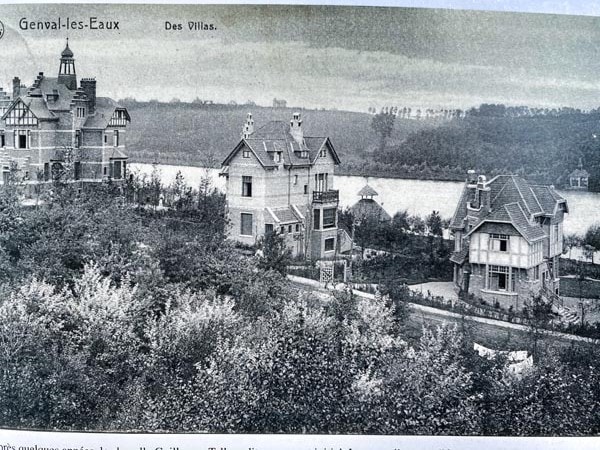 The lake of Genval, close to Brussels, was artificially created in 1903 with the explicit aim of becoming the happy few’s playground. Rich bourgeois families from the big city settled their weekend homes there and did not shy away from copycatting while at it. In fact: they recreated some of the most famous buildings of that era, including the fairy tale Swiss Wilhelm Tell chapel and several of Marie-Antoinette’s Petit Trianon’s structures. The result was some kind of precocious Disneyland -Belle Epoque rich kids gone wild!

For don’t be fooled by the still waters, the amount of craziness in this place does run deep. A plane crashed right in the middle of the lake during the war, with local treasure hunters still fishing remnants out of the water, and one of the grand manors overlooking the shores was pierced by a flaming car once before being set ablaze -something to do with it being rented out as a movie set…. Long story short: enough to keep your imagination triggered!

The same goes for Sarabande, a little candy-colored pavilion floating over the lake. It was built in 1926 as a chilling and picnic pontoon by the family owning the estate just across the road. In the 1990s, it was acquired by the world-famous Soviet cello player Mischa Maisky. He turned the place into his little studio, reportedly playing while facing two mirrors reflecting the pretty lake. The balustrade was forged like a musical score, its metallic music notes recreating the tune of Johann Sebastian Bach’s Sarabande. If this place was good enough for a genius of the likes of Mischa Maisky, I guess it’s good enough for you and I, non?

Anyway, nowadays it acts as an enchanting B&B slash mini spa. You sleep right in the middle of the Pavillion in the plushiest of beds (big plus: the sheets smell like fresh lemons!), enjoy the breakfast with home-made jam (provided by the owner, living right across the street in the grand mansion) and -total time fracture- get to soak in the giant bubble bath on the wooden deck. Treasure hunters can rent paddles at the neighboring yacht club to explore all the Marie-Antoinette mania of the lake, and the B&B can arrange for massages right in the middle of the Pavillion -dream.come.true!

The Simple Life at De Stamper

Camp Chill: an outing with Wandelgoesting