The Art of Artfully Having Animals Pose for Class Pictures: Rob Macinnis 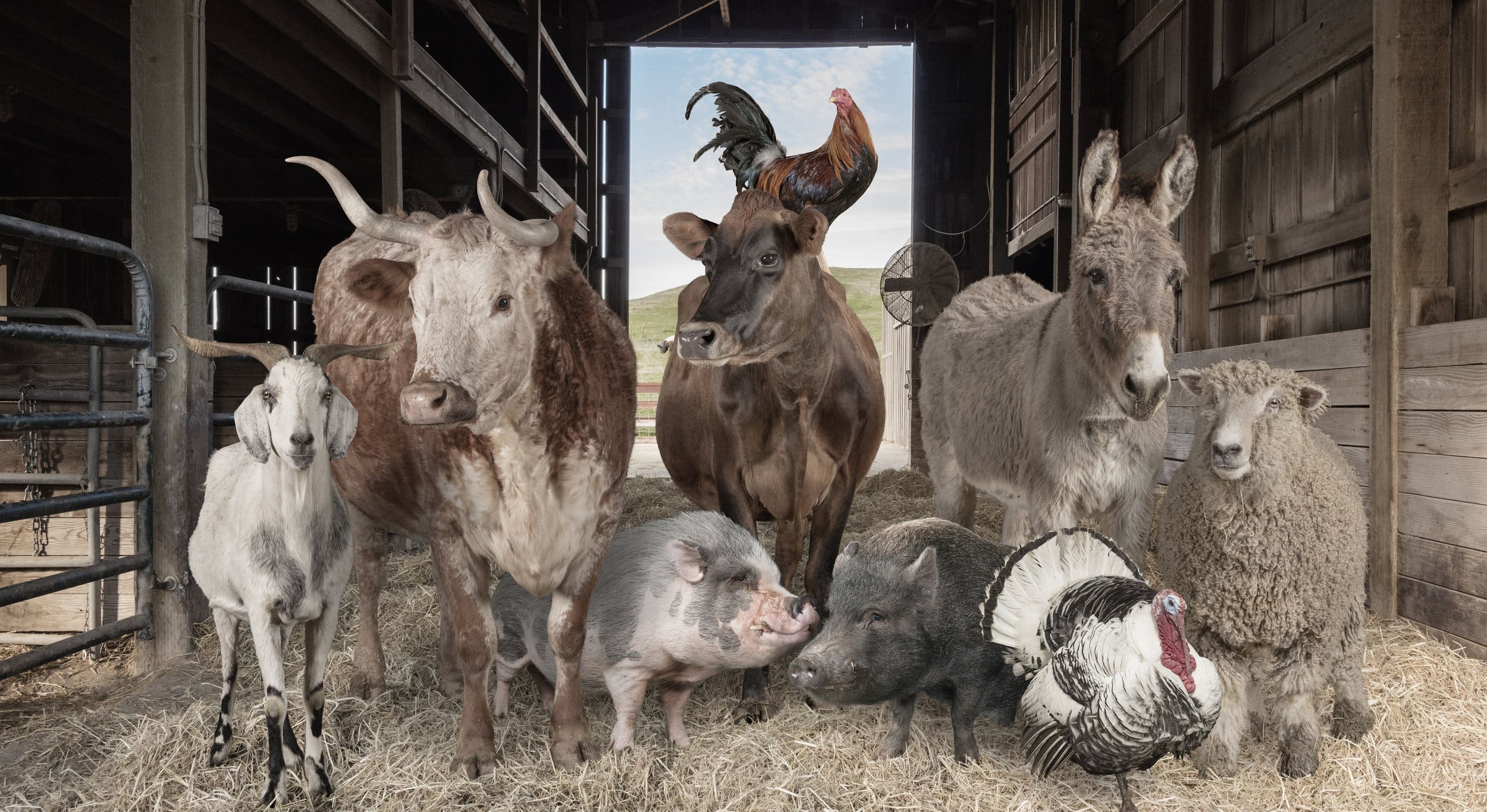 His group shots feel boldly inspired by Annie Leibovitz’ star-studded photoshoots and almost all his models are wearing fur, but for once nobody takes offense. Rob MacInnis has been giving farm animals the glamour treatment for over ten years and is not planning to stop: “doing it used to be a bit funny, but then it became something more.”

Anyone whose Instagram bio reads “Animals? Yes!” –including chicken and rabbit emoji- is on my list, but when I came across Rob MacInnis’ work I was particularly fascinated. He has oxen, donkeys, geese, sheep and lamas line up for class pictures and the result is both hilariously cute and seriously thought-provoking. The Canadian photographer lives with his wife but no dog in New York and travels around barns, capturing the glamour of those he has been known to label “the blue-collar workers of the animal kingdom”: not as sexy as exotic creatures, and reduced to merely practical goals, like providing food and physical labor. I managed to snatch him away from all the neighing, lowing and clucking for a while, here’s a short interview in human language:

First of all, how did this all start?

“It did very slowly and a long time ago, when I was still studying photography in Nova Scotia. All my classmates just took pictures of pretty girls and I thought that was both uninteresting and redundant. So I decided to portray a pretty donkey instead, which was funny at the time but I didn’t really develop the concept until a few years later. It’s not like I was obsessed with animals either; the only ones I knew, lived at the local petting zoo close to my home.”

Why would you portray farm animals like fashion models?

“I guess initially it was because the idea seemed inappropriate and funny; this was not the way to picture animals and in my young and antagonistic mind it was a way to make fun of the worlds of fashion and photography. After a while though, it came to have a deeper sense and I learned to see something different, past the unexpected of it.”

What’s with the Annie Leibovitz vibe?

“It’s true that she inspires me, but not in the sense you would expect; she has a way of digitally manipulating her images of stars and I am interested in how much humans are attracted to being manipulated in the first place. We enjoy the idea of a fantasy and photography is a very useful tool for that: we intrinsically trust a picture to be truthful, while it can in so many ways distort reality. It’s a contradiction in our minds: although we know we are being manipulated, we keep trusting our eyes. Millions enjoy Annie Leibovitz’ work, which does just that. I find that very inspiring and wanted to wield that power to subjects we often overlook, like farm animals.”

What explains your fascination with animals and nature?

“More than nature, I’m fascinated by the idea of what people are not looking closely enough at. When no one pays attention to something, it drives me to make art about it. It’s always about something hidden, something that’s out there but nobody noticed.”

And so why use fàrm animals in particular?

“Overall I feel like our society has a hierarchy within it, ranking certain groups and individuals above others –there’s a bit of the animal kingdom within us and we don’t even realize that. I focus on farm animals rather than exotic or wild creatures because they are intrinsically connected to us; we feed off them, we dress off them, we use their workforce, but ironically enough they are not considered part of our society. A glamorous portrait of a farm animal acts as a comment on how closely we are related, although we don’t consider them part of our culture.”

Where do you find your models?

“I used to drive up to farms, but farmers often proved to be a bit wary. Now I mostly turn to farm sanctuaries, which is something very American; people take animals in and care for them as if they were pets, taking them out of the system. They really love their cows as much as a regular guy would love his dog, and so aren’t freaked out by the idea of having me portrait them, on the contrary.”

Do you have a favorite animal?

“I like goats a lot, they’re highly intelligent although they are little devils. I don’t own a pet myself, not even a cat or a dog: I live in NYC, it wouldn’t be fair to the poor creature.”

How hard is it to photograph an animal altogether?

“Very hard! You need tons of patience for it. Usually when I photograph a particular animal it’s the first time I meet it and, like humans, things are a bit strained. After a while it grows more comfortable and will pose more naturally, just like people would. Normally I shoot for about one hour for a single portrait and it’s always the last photographs that prove to be the best.”

Does it ever go wrong?

“Oh yes, that’s part of farm life! I was once photographing sheep, when the owner got attacked by the ram. Animals are unpredictable, they can get angry or scared, sometimes mistakes are made and accidents happen. It’s not a sterile environment, it’s real. I have never gotten hurt myself, let’s hope it lasts.”

Do they ever surprise you?

“All the time and I learn something new on every shoot. Did you know donkeys always have buddies? Not in a romantic ‘mate for life’ way, just buddies. If you have 100 donkeys, you will have 50 pairs of friends, and it is really hard for them when they lose their buddy. That’s why it is super sad to keep one donkey all by itself, it will get very very lonely.”

Last but not least, do you have a book to recommend?

“When Species Meet by philosopher Donna Haraway. It’s an excellent read, though very dense, and reflects on how we relate to animals.”