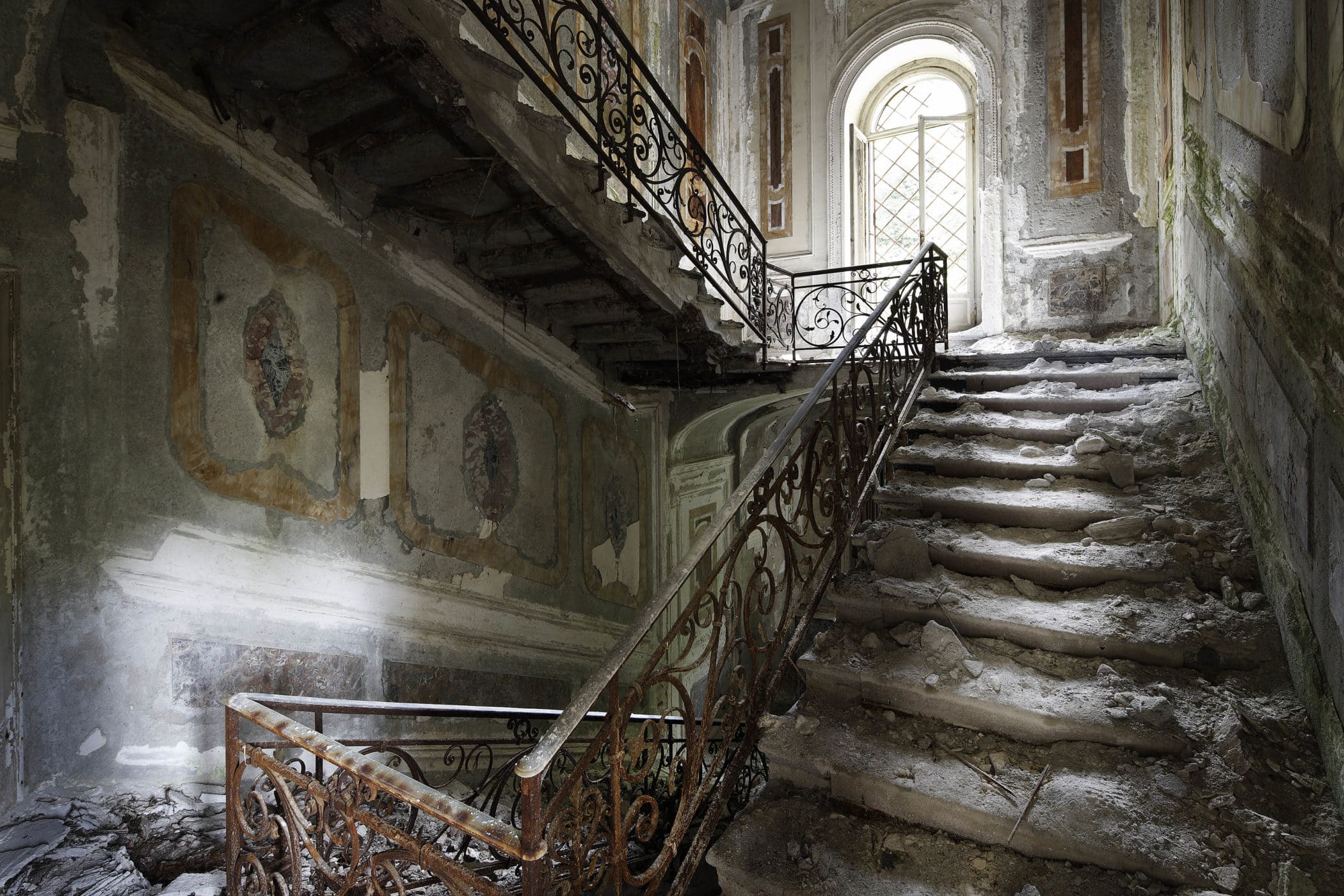 You’d think spending days up in the clouds makes one dream of far-away galaxies and spaceships, but not Henk Van Rensbergen. When he’s busy piloting his Boeing 787, the Belgian pilot and photographer’s mind trails off to life down on earth -more specifically to its ghosts and the notion of how fragile everything really is.

Van Rensbergen is one of the pioneers of the urban exploring movement, better known as urbex: the art of uncovering and photographing long abandoned places, documenting decay and lost history. For decades, he has combined his plane-hopping job with adventurous wanderings, the results of which are bundled in six mesmerizing photography books. In 2017, he closed the urbex chapter and began a bold new project: No Man’s Land explores a hypothetical world where mankind has entirely disappeared. I met the artist in the crypt of an old Antwerp church years ago to look back and forth on his impressive career:

First things first: how did it all start for you?

I’ve been taking pictures since I got my very first camera aged 16 and have always been fascinated by abandoned places. Top those two with a healthy urge to move around and you have the perfect recipe for urban exploring. Back then, nobody really knew this term, it wasn’t as popular as it is today, and we were only a few to practice it. Since the nineties there has gradually been a growing interest for it and nowadays many photographers try their hand at it. The adventures, the thrill of discovering something, the uncovering of long lost stories: it is stirring. This has pros and cons, one of the advantages is that there are more people who can point me to interesting places.

There’s a lot of secrecy evolving around it, how comes?

I have travelled a lot and built quite the network over the years, which is essential as you need reliable sources to share certain information on where to go to and how to get there. There is an entire community busying itself with urban exploration, but these last years, with the explosion of urbex’ popularity, it has grown more discrete. Not so much because we don’t want others to explore the same places we do, but rather to protect those places. There has been an influx of thieves, burglars and vandals, so now people tend to be more wary of whom they share which information with.

Is there a code of conduct when you step into an abandoned building?

“Take nothing but pictures and leave nothing but footsteps.” This pretty much sums it up: mankind has this weird tendency to leave behind its prints, by carving names everywhere and taking stuff, which is not to be encouraged. Beside that, on a legal level urbex is kind of a grey area: the line between visiting and breaking and entering tends to get a bit blurry. I for one would never enter a place that is clearly still inhabited, or that is secluded with heavy locks and signs: if somehow the owner explicitly makes clear he wants no intruders, I don’t enter. As an artist, there’s also the code of originality of course: I don’t mind people exploring the same places as I do, but I do object when they flatly copy my pictures once there.

A lot of your pictures are taken at night in eerie places, don’t you ever get scared?

All the time! I mostly work by myself and it is definitely spooky to wander around, say, a deserted hotel in the middle of a German wood at night. I climbed through the window to get into that one, my flashlight creating uncanny shadows everywhere, stairs creaking and then all of a sudden saw my own reflection in a mirror: yes my heart did and still does skip a beat every now and then! On another occasion, I photographed a dilapidated rollercoaster at night in an abandoned Japanese theme park. After climbing over the fence and steadying myself on the rotting wood of an attraction, I was waiting for the perfect ray of moonlight to appear, when suddenly I saw another man crouching in the scrub, watching me. I was spooked and couldn’t move, but he also just sat there and didn’t move for minutes. After a while, I shone my flashlight over him and he turned out to be a cowboy mannequin…  Humans are not made to be alone in dangerous situations and our entire body reacts to it, our instincts tell us it’s a very bad idea and there’s no way to scare off that fear. But still I go, I can’t help it.

So what keeps pushing you to go in anyway?

Every building or place has a story in stow and that is what fascinates me: what can it tell me about the people who lived and passed here? What happened to them? What have they left behind? I approach a building like I would a person: I first take some time to get to know its story, I listen and I watch. If somehow it doesn’t appeal to me, I don’t photograph it. That, more than the spectacular aspect, thrills me. Others do it for the chase, they have wild stories to tell on how they bypassed armed security guards and their dogs to get in somewhere, but for me that is not the essence, I prefer a more philosophical approach. Of course, overcoming a challenge does make one proud. I was once ushered into a derelict New Jersey theatre by a policeman who frequently came there during his night shift, chasing addicts and petty criminals. Police are very useful sources by the way, as they often enter abandoned places! There was nothing to see, as it was pitch dark inside, and the place was riddled with a moist smell. We opened up one of the top doors to let a ray of sunlight in and I had to take four different photographs, each with a different lighting and rate, to compose my final shot. It was only back home, when I added them all together, that I could see how magnificent the place really had been. Succeeding into taking that shot makes me more proud than the fact I may or may not have bypassed some guard.

With the exploding popularity of urban exploration, I can imagine “real” undiscovered, abandoned places must be getting scarce?

Well first of all, no place is ever really undiscovered: there are always neighbors, heirs, owners or local urchins (they are my best sources by the way!) who’ve known of it. Apart from them, you’d be surprised by how many settings still sink into oblivion. There are many here in Belgium, and abroad it seems like each country kind of has its specialty. Japan has derelict attraction parks, there are dozens of desolate little castles in Italy and France, hotels and recreation areas in countries such as Germany, and the United States have quite the amount of abandoned hospitals and psychiatric asylums –which of course are the most uncanny of them all.

Your most recent work, No Man’s Land, moves away from urban exploring, why is that?

Artistically, I was ready for something new as I felt the field was getting saturated with too much of the same imagery. I applaud the fact that so many are now pursuing urbex, but it annoys me how many copycats arise. I needed to find another way to express myself and explored the idea of a world without human beings. Buildings would decay and be taken over by animals, seemingly doing human stuff. A piglet enjoying its mud bath in a farm suddenly becomes a great philosopher when placed in the ruins of a once majestic church. Therefor each picture is a composition of an animal portrait (the art of which was new to me when I started) and one of a building. I needed to match lighting, color and perspectives and see which story would fit the resulting image. It’s not up to me to tell that tale, so I was lucky to have famed zoologist and The Naked Ape author Desmond Morris write the preface of the book. The underlying message turns out to be more unsettling than any spooky psychiatric ward has ever been: if we keep going on like we are now, a world without mankind will be the reality sooner than we think…