I have found you the prettiest school in the world

Hogwarts meets Miss Minchin’s Seminary For Young Ladies, topped with some definite Beauty and the Beast vibes: I have found the school of every novelist’s dream!

You know that scene in A Little Princess where the girls lazily read books in a lavishly decorated grand salon, while their headmistresses plays relaxing tunes on the harp? Looks pretty out of this world: a beautiful piece of set design, yet nothing to do with reality. Right? Wrong. At the Pensionnat de Demoiselles de Wavre-Notre-Dame, hidden in the Belgian countryside, it used to be an everyday occurrence. (Okay, maybe without the harp.) 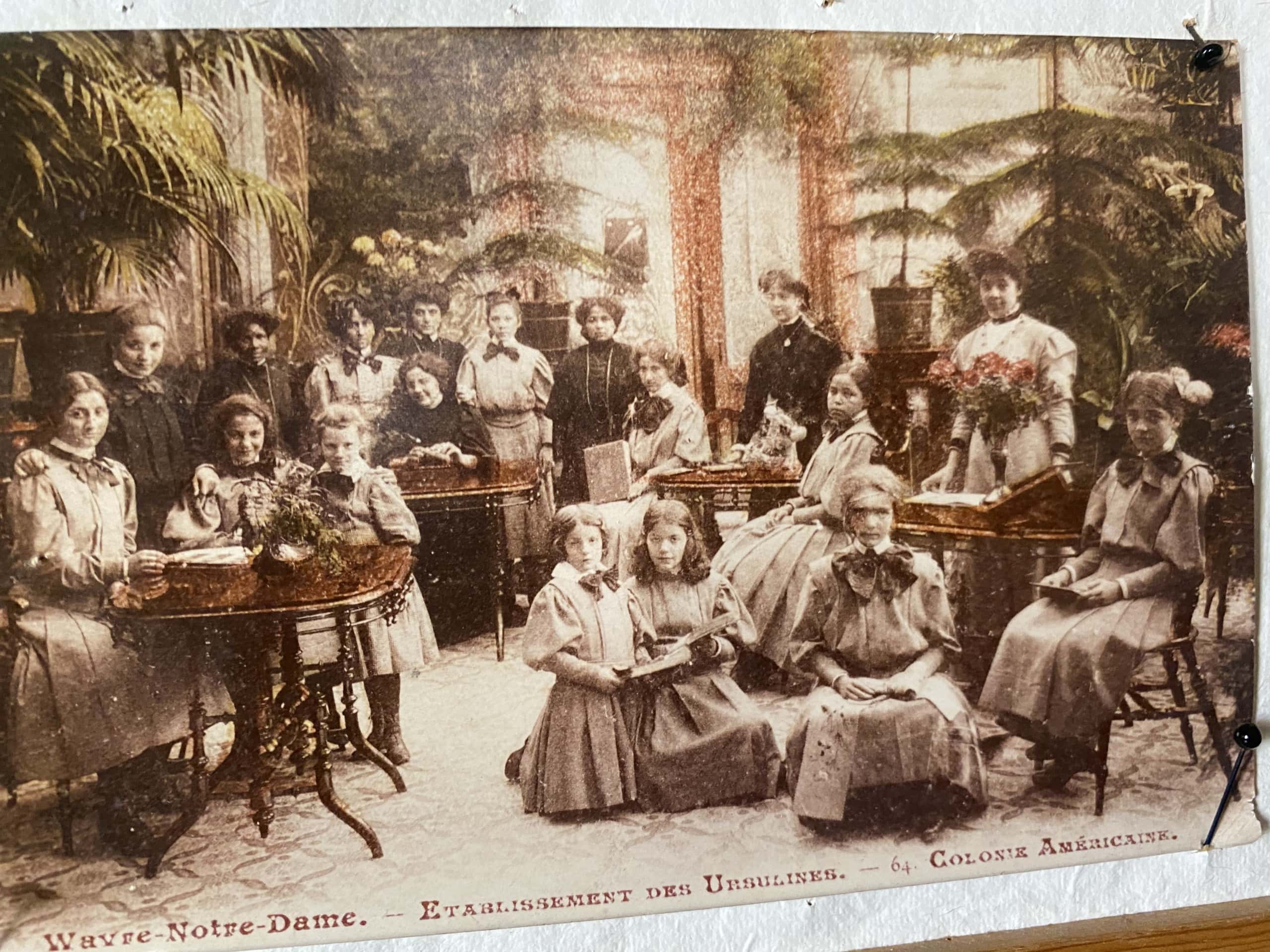 Real life.The school, led by the order of Ursuline sisters, was marked as thé place to be for European elite in the late 1800s and the sisters did everything in their power to live up to its ultra chic, posh, surreal standards. Which means drop-dead gorgeous architecture, a remarkable mix of then-popular art forms ranging from art nouveau, art deco and empire to neoclassicism, and of course a powerful PR-campaign reaching far behind the convent walls, all the way up to the colonies and even the United Stated.

By the end of the 19th-century, Belgium established quite the reputation for good education. Top of the list was the aforementioned Pensionnat, a boarding school that was specifically designed to attract the rich and famous, a beautiful structure amidst a green property of 10 hectares (which would do good to the lungs of all those precious little girls). High-society girls flocked from all corners of the world: Hungary, Russia, Austria and even Africa, staying at the school for months, sometimes even years in a row. Now, imagine being 11 years old in 1900, sent off to school in some godforsaken country, not able to see your parents for at least half a year. When they do occasionally pop up, it’s a big, very big deal. The sisters knew that and accommodated visiting parents with all the grandeur they expected.  Parent/daughter meetings didn’t take place in some austere parlor, but in the winter garden they had especially designed for such occasions. Back to that eleven-year-old: imagine her having high tea with papa et maman in an otherworldly beautiful greenhouse, surrounded by lush plants and marble statues to remind them of the female virtues she is being taught here… Picture perfect! Mysteriously enough, the architect of this Art Nouveau gem remains unknown to this date.

The sisters, keen on attracting the rich and famous, were masters in PR by the way. They knew which aesthetics would catch the attention and speckled it with hints of glamorous lifestyles even within (and on) the walls of a religious boarding school. I can only imagine what their Instagram account would have looked like nowadays… While the walls surrounding the winter garden showcase Belgium’s great cities for instance, a nearby dining room is gloriously decorated with “familiar holiday scenes” -as in: skiing scenes in Davos, Kloster and other upper-class favorites their pupils were supposedly spending their holidays.  Likewise, the children’s refectory, still in use today, features all the fables of Jean de la Fontaine. Special points for the original furniture too: authentic marble tables, fixed in the floor, and the exact wooden chairs the girls sat on over a hundred years ago. It’s crazy to think this century-old furniture withstands the mark of time, but there you have it: the place also offers a great lesson in sustainability as everything was built not only to be functional ànd pretty, but also to last. Just consider the marble spanning the walls up until the height of a child -in order to protect them from children’s feet and nonchalantly thrown book cases: très très smart.

What else? I’d like to mention the music room….: hidden behind a blank door that suggests nothing more than a cupboard, lies an impressive piano gallery of 33 neatly positioned pianos, each one named after another great composer -the classics, but also surprisingly bold and modern ones. No expenses were spared to teach all those little princesses how to musically entertain their future guests in their future grand homes of course. The gallery has been abandoned for years, but was recently restored and put back into action: nowadays, a green key on the door marks if the ancient piano has been tuned. I forgot to tell you this incidentally, but the school still operates today, hosting over a thousand pupils! I know, it is too crazy for words. Also crazy: the secret biology room that looks like Harry Potter’s astronomy tower, tucked away behind a chapel on the first floor. You’d expect another cupboard containing religious robes or the stock of candles, yet it features rows and rows of old bones, stuffed animals and other curiosities. If there is ever a place for rebel teenagers to secretly lit a forbidden cigarette, I’d say it’s definitely here: right between the stuffed crocodile and the enormous hippopotamus skull. Amen.

Need your own dose of Hogwarts? You can visit the historical parts of this peculiar school every Sunday on request and the guided tour is worth every penny. I was shown around by an adorable grandmother/granddaughter duo and the former had actually attended the school in her youth. While nowadays the more elaborate rooms such as the winter garden, cabinet of curiosities and piano gallery are off-limits to unaccompanied students, they used to be free to all and my guide even remembered attending ballet classes -taught by a nun- in there…! I’ll leave you to some daydreaming now, accompanied by an imaginary harp.

The Simple Life at De Stamper

Camp Chill: an outing with Wandelgoesting