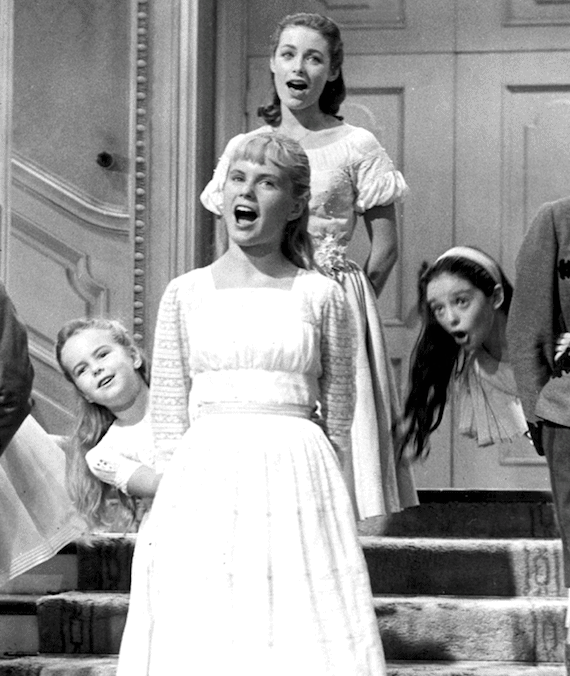 I am Louisa. Or was it Brigitta? That’s right; I’m the blonde one from the sound of music and you can’t even remember my name! I got to sing the “La” in my nanny’s infamous educational singing for dummies-videos and my poor little head cap took the blow when daddy Von Trapp got really mad at us for synchronically dipping into the family’s lake in front of his chic girlfriend.

I’d like to take this moment to thank my small yet loyal fanbase for sticking with me through the entire ordeal of having six siblings to compete with. Of course I didn’t stand a chance against my brothers: no performer in his or her right mind would ever dream of borrowing some spotlight from two lederhosen-clad, high-pitched singing blonde boys. The couple of muffin-lookalikes, better known as my chubby toddler sisters Gretl and Marta, was also a no-go, always parading around with band-aid on their finger, inflating their podgy cheeks and occasionally dropping tomatoes to the floor at the exact moment the attention might risk to stray away from them. I tell you, those two are cunning!

And don’t even get me started on Liesl, who got to wear see-through sleeves, suggestive dirndles and collar-bone exposing dresses, while I seemed to be confined to the wardrobe of a ten-year-old porcelain doll. It’s all just terribly unfair, especially since I’m physically clearly the same age as her. The only time I was permitted something more fashion-forward, it got ripped off my perfectly groomed bangs by my father –RIP headscarf.

Anyway, don’t worry too much about me as I did have a pretty good life going on in my amazing lakeside home, eating schnitzels with noodles and climbing walls while carrying jars of spiders. So, back to my dear followers: thank you for genuinely appreciating how much work I put into grooming those flawless bangs of mine, and into rehearsing that lovely little pas de deux I performed alongside Brigitta during the So Long Farewell performance –which was my shining moment, as I was finally allowed to take centre stage.

Speaking about Brigitta, she was off far worse than me as people only recall her as the girl whose booty got spanked for reading a book during marching hours –she’s got some fierce feminist uprising to do, but I’ll let her to it, I have my own battles to fight.  Speaking of which, this will probably be my last blog as I have to put on my vintage hunting cape and hike over the Swiss mountains alongside my family, off to a new life which will hopefully give me more prospects into developing my performing career. I can only hope the Muffin Duo will be able to resist the long journey and won’t have me carrying them, I don’t want to risk overburdening my promising ballet feet.

Anyway, XOXO for now, so long, farewell, and do look out for me on Broadway!

Louise de Stairs (Which is my artist name. I know. It’s freaking’ awesome.)

PS: If for some reason you’d like to revisit the gross mistreatment of my curtain-head-cap, it’s here at 1:15… :

Here's a rant by Mrs. Lisa