The Belgian interior designer moved into the grand old house at the entrance of Ghent a few years ago, and literally started uncovering the many layers of untold stories its walls contained as she restored it room by room. “I am obsessed with houses and would definitely describe myself as a homey person, which makes all my friends laugh because I haven’t slept in the same bed two weeks in a row since I was twelve, even now that I have a kid.” After having commuted between hometown Ghent, her Parisian studio and her different projects across Europe for years, she decided to open a second studio in Belgium and her eye fell on the stately art deco building. “I tend to choose my projects intuitively, based on the spirit and story of a place. To me, it’s important to respect the original design of an edifice and to honor its tradition, I like to know the story of the people who lived there.” Plenty of that in her new home, where many different lives crossed before she moved in alongside husband Benoit, little baby Aldo and Joe the dog.

The place was built in 1929 by architect Charles Hoge and was inhabited for decades by a businessman and his family. The original owners’ granddaughter, Michelle, grew up there and reached out to Hélène a few years ago, painting a vivid portrait of life within its walls. Her grandfather Emile was a creative at heart and never left the house without bowler hat and umbrella cane, he liked to experiment and managed to set fire to the glass porch on the first floor ànd to kill off the entire little orchard in the garden. He also invested in a hyper modern gas fire, but would pester against it his entire life as it never worked. His strict wife seemed to be the terror of both the maid, who stayed on until 1960 and had to sneak out of the house at night to meet her many boyfriends, and her granddaughters, who would try to spit on her head from the upper floor, all through the grand staircase. During the war, a bomb fell on the nearby town of Merelbeke and all the glass windows in the house exploded. Everybody was shaken, but the lady of the house, who didn’t even wake up and merely complained of a bad dream in the morning. She occasionally did some kick-ass stuff too: when the occupying forces commandeered the house next door, she sneaked in and brought all the fled inhabitants’ silverware to safety, laying the basis of a lifelong friendship between the two households.

After grandfather Emile and his clan, new generations of inhabitants put their stamp on the house. Before Hélène arrived, a couple of artists worked and raised their children there. Having lost a son, they planted a Japanese cherry tree in front of the door and spread out his ashes underneath it. That is why they didn’t want to sell the house to the highest bidder, fearing it would be chopped up in apartments. Having rejected many offers, they finally settled for Helene’s once they were reassured she had no plans with it other than to establish her studio and raise a family of her own.

True to her promise, Hélène gave the place a much-needed facelift, but left its soul untouched. “I love art deco and tried to restore as much as possible. The ironwork at the entrance, the windows, the bathroom; it’s all original. I moved the bathroom one floor up and in order to do so had to scrape and rearrange 876 tiles.” The bathtub, sink and mirror also came along, resulting in the cutest little attic bathroom. Her own bathroom is an urban jungle: plants everywhere and big windows to invite all the light and outside greenery in. That and some unwanted gazes, as she discovered one day while standing in the shower and seeing her husband awkwardly waving at her from across the street. “Ok so I may install some curtains in the not too distant future…” Also cute: baby Aldo’s pink room. “I wanted a pink room in this house as I think it matches perfectly with the art deco feel and the many black touches. Ben told me I could do it, but only in the smallest space, which is now the baby room. We decorated it with sturdy vintage furniture and a lot of animals, so it’s still a little man cave, no?”

I’m wondering, is there anything left to dream of when living in this picture perfect house? “Of course! This is truly la maison du bonheur, but I’m not done with building homes and I have quite a few other ideas up my sleeve. I dream of a holiday home where we can unite our friends and family: Refaire le monde le temps d’une soirée chaude au parfums embaumants, avec sa tribu bien aimée…” 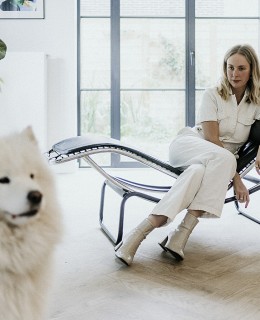 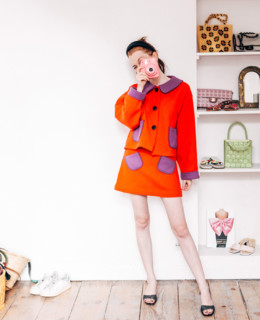 Marie, the girl with the scrunchie